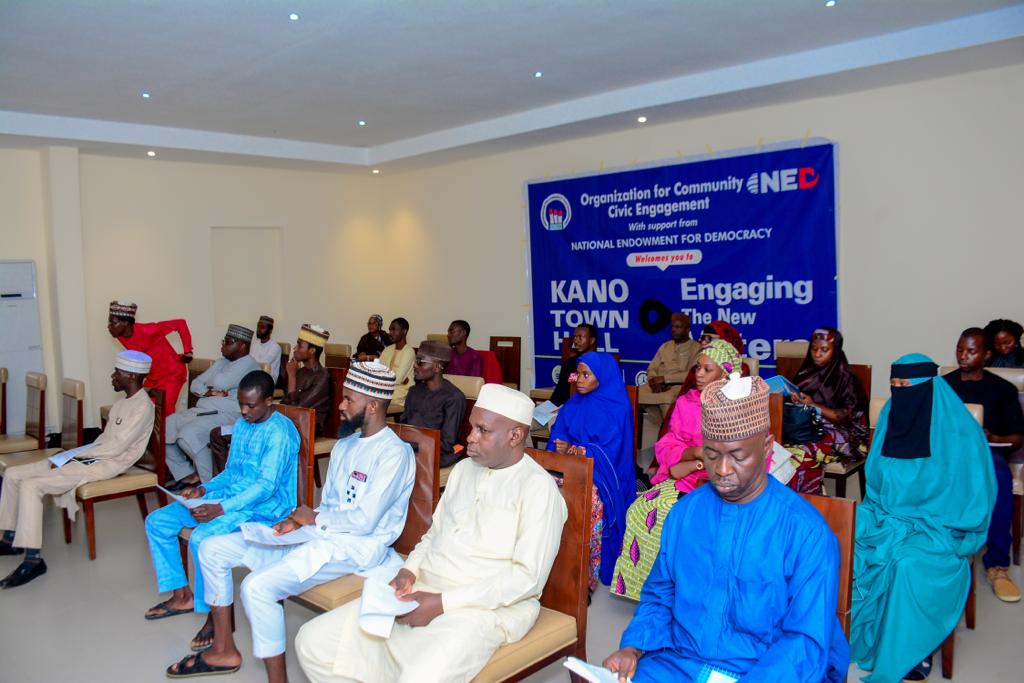 COMMUNIQUE ISSUED AT THE END OF A ONE-DAY TOWN HALL MEETING WITH THE THEME: “ENGAGING THE NEW VOTERS” ORGANIZED BY THE ORGANIZATION FOR COMMUNITY CIVIC ENGAGEMENT (OCCEN) WITH SUPPORT FROM THE NATIONAL ENDOWMENT FOR DEMOCRACY (NED) HELD ON THE 22ND AUGUST, 2022 AT BON HOTEL, KANO.

HIGHLIGHT OF THE EVENT

The Town Hall meeting was Chaired by Professor Habu Mohammed, Department Political science, Bayero University, Kano. In his opening remarks, he called the attention of participants to the importance of the meeting and also commended OCCEN for organizing it.  He also further stated that the choice of the topic was timely and the selection of the participants was well thought out. while speaking about the objectives of the meeting, he stated that it was intended to rub minds together and proffer solutions to the possible challenges to the success of the forthcoming elections as well sensitize and enlighten the new voters on the need for to understand the values attached to their votes.

On his part, Mr. Abdulrazaq Alkali, the Executive Director of OCCEN, thanked members for honoring their invitation. Thereafter, he presented a short paper about the activities of the organization and the milestones it achieved. He equally commended the role of the Independent National Electoral Commission for their continued effort in creating new voter friendly policies and innovations.  Finally, he called the Commission to continue to work towards ensuring a free, fair and credible elections in 2023.

The Public Relations Officer of INEC in Kano highlighted the activities of the Commission in preparation for the forthcoming elections while briefing participants on the number of newly registered voters recorded during the recently concluded registration of voters in the state. He stressed the need for the registered voters to collect their Permanent Voters Card (PVCs) because there were more than 400,000 unclaimed PVCs with the commission. He called for continued partnership and engagement in areas of public enlightenment and sensitization between all the relevant stakeholders. Besides, he called for mobilization of people to come out and collect their PVC’s, noting that their votes are their rights.

The   National Orientation Agency (NOA) represented by its Director of Administration stated that the agency is working in areas of public enlightenment and awareness on government policies. He added that the agency has structures across the 774 LGA’s of the federation and that on matters of election, they conduct pre-election, election and post-election activities. At the level of pre-election, he pointed out that the agency has come up with pamphlets and leaflets that carries the following messages in order to raise the awareness of people to exercise their civic mandates

Another speaker from the Inter Party Advisory Council spoke about the role of political parties in creating awareness to voters and as well their role in bringing together all the political parties in the state under the same umbrella. Participants at the event had the opportunity of making comments, observations and questions to the speakers. Therefore, upon concluding deliberations on issues discussed at the meeting, the following recommendations were made: