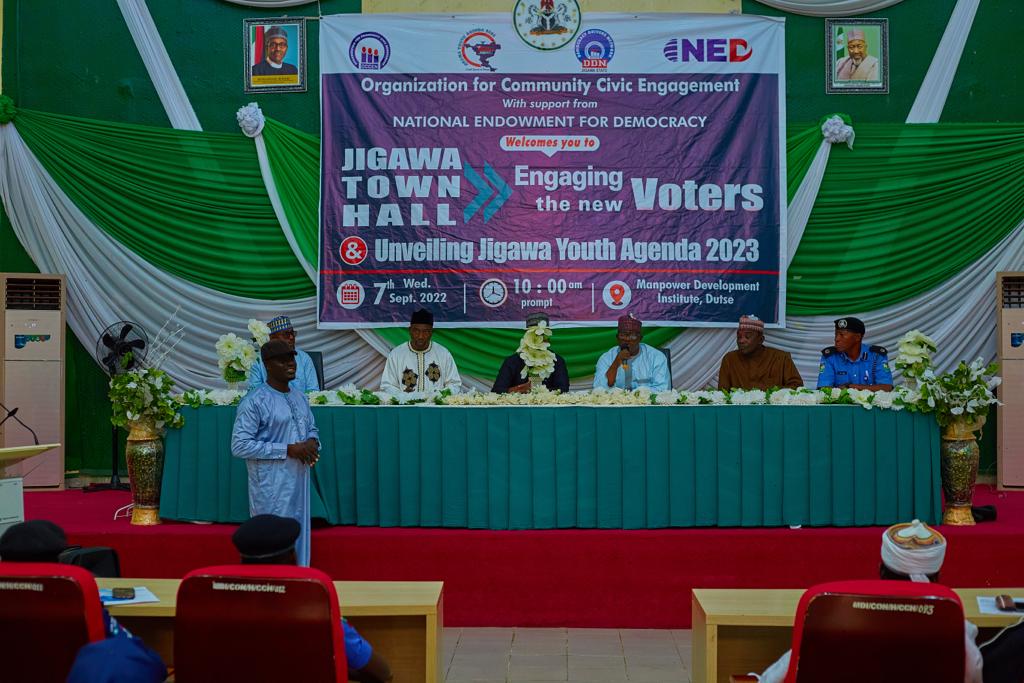 The meeting started with an opening prayer and self-introductions by all participants. The event was attended by the Jigawa State Chairman of the Independent National Electoral Commission (INEC), the National Orientation Agency (NOA), the Interparty Advisory Council (IPAC), the Nigerian Police, Nigeria Security and Civil Defense Corps (NSCDC), Department of State Security (DSS) representatives of the Emirs of Hadejia and Dutse Emirate councils, media houses as well as Civil Society Organizations (CSO’s) and newly registered voters in Jigawa State.

Welcome remark was offered by Comrade Musbahu Basirka where he welcomed all participants and thanked them for honoring the invitation despite their tight schedules.

Mr. Abdulrazaq Alkali, the Executive Director of OCCEN, also thanked participants for honoring the invitation. Thereafter, he made the opening remark and presented a short paper about the activities of the organization and the milestones it achieved. He further stated that the choice of the topic was timely and the selection of the participants was well thought out. While speaking about the objectives of the meeting, he said the event was intended sensitize the newly registered voters on what to do before, during and after elections. He stated that it was intended to rub minds together and proffer solutions to the possible challenges to the success of the forthcoming elections as well sensitize and enlighten the new voters on the need for them to understand the values attached to their votes.

He equally commended the role of the Independent National Electoral Commission for their continued effort in creating new voter friendly policies and innovations. Finally, he called the Commission to continue to work towards ensuring a free, fair and credible elections in 2023.

The Resident Electoral Commissioner of INEC in Jigawa state highlighted the activities of the Commission in preparation for the forthcoming elections while briefing participants on the number of newly registered voters recorded during the recently concluded registration of voters in the state. He stressed the need for the registered voters to collect their Permanent Voters Card (PVCs) because of the 700,000 new PVC’s, only 2000 have been collected so far. He also stated that INEC is working on the creation of more voting points in order to ease the voting process. He called for continued partnership and engagement in areas of public enlightenment and sensitization between all the relevant stakeholders. Besides, he called for mobilization of people to come out and collect their PVC’s, noting that their votes are their rights. He added that INEC gives chance to every eligible voter to participate fully, particularly the youth, people with special needs, pregnant women among others.

The representative of the National Orientation Agency (NOA) in his remark stated that the agency is working in areas of public enlightenment and awareness on government policies. He added that the agency has structures across all the local government areas of Jigawa state and they are at the forefront of educating voters. He added that there is a strong relationship between and among all the relevant stakeholders in the state.

Another speaker from the Inter Party Advisory Council (IPAC) stated that they are working closely with all relevant stakeholders in creating awareness and sensitizing the people on the need to exercise their civic duty. He added that IPAC has set up committees across all the local government areas in order to see that voters do not suffer before and during elections.

Participants at the event asked critical questions, some made observations and recommendations to especially INEC on ways to distribute the unclaimed PVC’s. Others lamented on the deployment of INEC Ad-hoc staffs that do not understand the language of the local people especially the youth corp members in the state.
The Jigawa Youth Agenda 2023 was unveiled by the representatives of the emirs of Hadejia, Dutse, the executive director of OCCEN, INEC resident electoral commissioner and other dignitaries. The Jigawa Youth Agenda is a strategic policy document that outlines the needs of the youths in Jigawa state and as well gives policy recommendations to the government on ways to enhance and improve the wellbeing of the youths.

While making their remarks, the representatives of the emirates thanked the organizers of the event and assured that they will relay the message to the emirs.
Comrade Musbahu Basirka of the OCCEN democracy drivers network in Jigawa state made the closing remarks, he thanked all the participants for honoring the invitation and urged especially the new voters to make use of all they learnt in the event. He wished everyone a safe journey back to their various destinations.