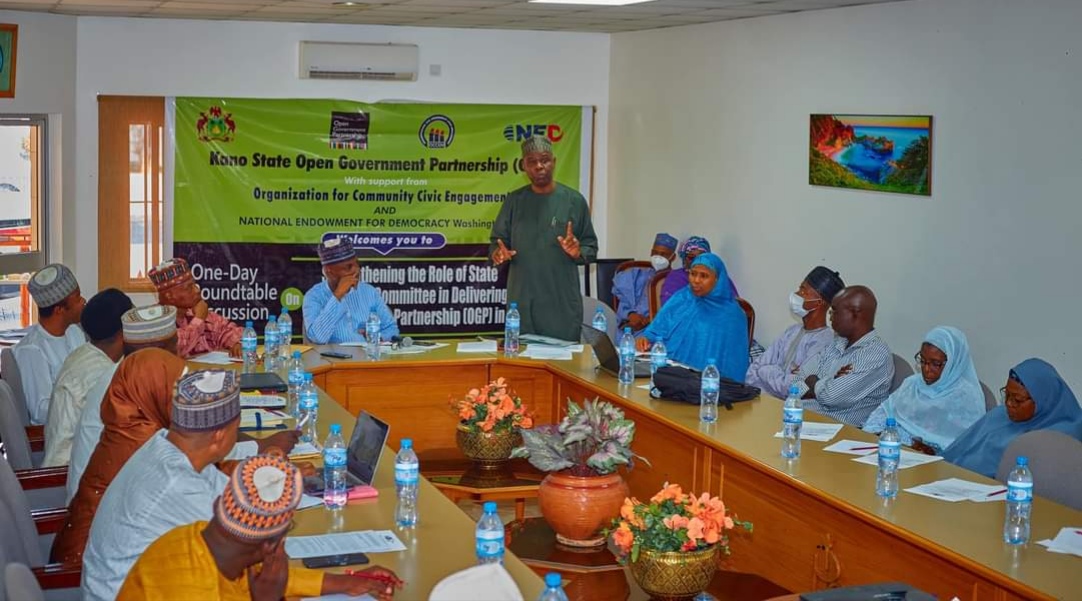 A REPORT OF A ONE-DAY ROUNDTABLE DISCUSSION ON STRENGTHENING THE ROLE OF STATE STEERING COMMITTEE (SSC) IN DELIVERING OPEN GOVERNMENT PARTNERSHIP (OGP) IN KANO STATE. SUPPORTED BY THE ORGANIZATION FOR COMMUNITY CIVIC ENGAGEMENT (OCCEN) FUNDED BY THE NATIONAL ENDOWMENT FOR DEMOCRACY (NED) WASHINGTON D.C

The meeting commenced with an opening prayer offered by Dr. Abdulsalam Kani followed by self-introductions by all the participants. A goodwill message was given by the representative of the Executive Secretary of Public Complaints and Anti-Corruption Commission (PCACC) where he said that it has been long time members of the OGP gathered. He therefore called on the attention of the members of the steering committee on the need to be having meetings from time to time. He wished members a successful and fruitful deliberations.

The opening remarks was done by the Civil Society Co-Chair in person of Mr. Abdulrazak Alkali where he welcomed all participants and highlighted the purpose of the meeting as to ensure members of the steering committee refresh their memories about their roles and responsibilities. He added that the meeting is a necessity because an action need to be taken in order to revive the work and activities of the State Steering Committee (SSC). He said that the OGP is a co-creation where the government and CSO’s have equal responsibility. Mr. Alkali added that having the Executive Chairman, Kano State Policy Implementation Strategy and M&E Directorate in Person of Engr. Rabiu Suleiman Bichi in the meeting is of paramount importance as he will help in terms of facilitating some of the issues that will further the course of OGP especially in raising the level of commitments from the public sector in Kano state.

An overview of the concept of OGP was made by a member of the state steering committee in person of Umar Saleh Anka where he briefed especially the Executive Chairman, Kano State Policy Implementation Strategy and M&E Directorate in Person of Engr. Rabiu Suleiman Bichi about what OGP is all about. Mr. Alkali also made a presentation about the journey so far and the actions needed to improve on the status quo.

A Remark was made by the Executive chairman Kano State Policy Implementation Strategy and M&E Directorate where he said that it is the first time he is hearing about the state steering committee even though he is aware of OGP in Nigeria. He assured the members that he will go through the policy document and promised to work assiduously in order to create a synergy between the state steering committee and his office towards the realization of the Executive Governors assent of the Action Plan II and other areas of collaboration that would create an avenue for greater understanding between the government and civil society groups in the state. He called on the state steering committee to do more on sensitizing the community especially on eradicating the menace of corruption in the society. He equally complained about the media houses attitude on the aspect of dissemination of information especially when it affects the government.

A paper titled “Public Sector Engagement in OGP Process” was presented by the Director Human Resource, Office of the Head Service in person of Mr. Abba Danguguwa where he stated the level of engagement of the public sector and their limitations.

A remark was made by a member of PERL and the speaker wished to see new changes in the state OGP more especially on issues affecting the secretariat and as well ensure that all processes are followed to logical conclusions. The speaker also added that there is need to make an engagement and compare with the action plan for record purposes.

On the next step, members agreed that a one-day discussion will be organized to access the progress made so far in connection to the activities of the action plan II. The state steering committee will await a response from the Executive chairman Kano State Policy Implementation Strategy and M&E Directorate on the assent of state action plan II by the executive governor.

The meeting was brought to an end after a closing remarks by the OGP co-chair where he thanked all participants for their time and contributions.