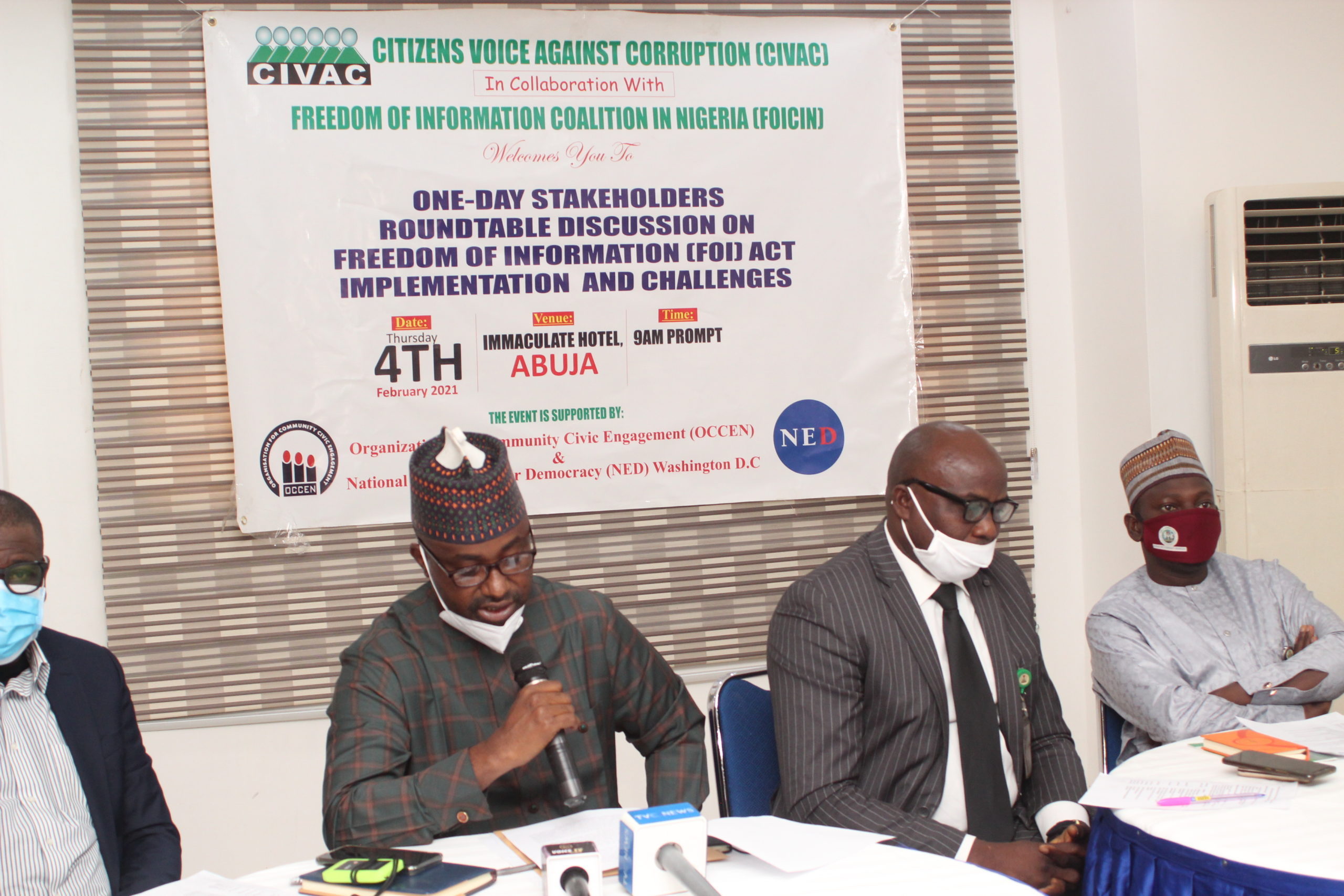 COMMUNIQUE ISSUED AT THE END OF A ONE-DAY ROUNDTABLE WITH MDAS AND CSOS ON FREEDOM OF INFORMATION ACT IMPLEMENTATION AND CHALLENGES IN NIGERIA ORGANISED BY CITIZENS VOICE AGAINST CORRUPTION (CIVAC) IN COLLABORATION WITH THE FREEDOM OF INFORMATON COALITION, NIGERIA (FOICIN) HELD AT IMMACULATE HOTEL, ABUJA ON 4TH FEBRUARY, 2021

Nigeria is among more than ninety countries in the world and among the eleven countries in Africa that passed the Freedom of information act. The Freedom of Information (FOI) Act was signed on the 28th of May 2011 by the administration of President Goodluck Jonathan. The Act grants citizens legal right to access information, records and documents held by government agencies and related entities carrying out public functions.

The Act was intended to make government agencies and partner private entities to function with more transparency and accountability so that the public could easily identify problems in government functions and demand government officials to address them.

It is believed that an informed public is vital for proper operation of a democracy and the FOI Act provides a means for citizens to access, evaluate and criticize decisions taken by government agencies which will go a long way in promoting the democracy we practice as a form of government.

Citizens Voice against Corruption (CIVAC) in collaboration with The Freedom of Information Coalition, Nigeria (FOICN) organized aone-day roundtable with MDAs and CSOs on Freedom of Information implementation. The roundtable aimed at engaging MDAs, CSOs and Media on FOI Implementation, compliance and misuse in Nigeria and how the FOIA can be used to effectively bring about openness, transparency and accountability in governance. The meeting is also aimed at facilitating establishment of National Monitoring Team on FOI.

After participants constructively and exhaustively discussed challenges, misuse and poor compliance issues, the following observations and recommendations were made: