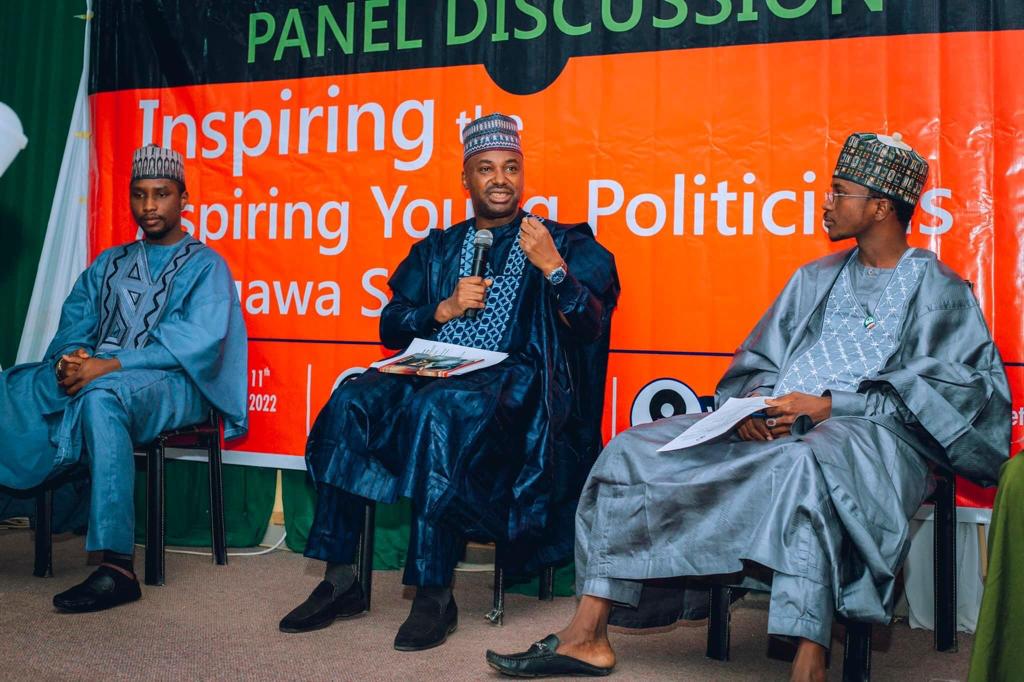 The Organization for Community Civic Engagement (OCCEN) with funding support from National Endowment for Democracy (NED) organized a one day workshop with the theme “Inspiring the Aspiring Young Politicians in Jigawa State”. Participants are youths drawn from across the different political parties in the state who are aspiring for different political positions in the state come 2023 election year. Also in attendance were two university lecturers, a member of the Jigawa state house of assembly who were part of the panel. Media personnel were also in attendance and other civil society activists. A total number of 61 participants drawn from across the 27 local government areas of Jigawa state were in attendance.

The event started with an opening prayer from a volunteer, and then followed by self introductions by all the participants and the OCCEN team. The executive director of OCCEN Mr. Abdulrazaq Alkali took over to give a welcome remark and a general overview of the event. Mr. Alkali introduced members of the panel and welcomed all for honoring the invitation. He stated that OCCEN as an organization that is working to strengthen democracy, rule of law and human rights feel it is time to start engaging stakeholders as the 2023 election year is approaching. The ED added that the objective of the event is to identify and highlight the important characteristics or elements that a role model should possess in order for him to be worthy of emulation by the young aspiring politicians and also the qualities and skill they need in order to participate and succeed in representative politics.

Dr. Abdulhadi Zubairu Chula, the Dean faculty of Education, Federal University, Dutse gave the goodwill message where he commended OCCEN for gathering the youths for this important discussion. He encouraged the youths to actively participate in politics but before that, they should screen themselves to see if they really have what it takes to become leaders and representatives of the people. He equally charge the youths to do away with the traditional (Use of Thugs) methods of campaign and embrace the modern and more civilized systems of getting the support and mandate of the people. He also stressed on the importance of having a mentor, role model and leader and as well an ideology.

Comrade Musbahu Basirka, OCCEN Jigawa State coordinator gave his remarks and thanked all the participants for honoring the invitation. He stated that representative democracy is like a contract between the electorates and the elected and he urged the participants to carefully listen to the panelists as they share their experiences and challenges encountered in their political sojourn. Comrade Basirka also urged the participants to have a clear motive of joining politics and that they should also understand the agenda and manifesto of their respective political parties. He also reiterated on having a strong ideology and having people with integrity as our role models and as well participants should also engage with people at the grass root level.

The session began and was moderated by ED of OCCEN, Mr. Abdulrazaq Alkali. The panel members include;

The moderator asked Muhammad kafin Hausa the question “what are your experiences as a youth and the youngest member in the state house of assembly? He replied by stating that politics is like a football game where the spectators see it as a very simple game. He said that in the past, he sees it as a very simple affair but when he found himself in it, he realized that it was never a simple task. He said that his response should not scare the youths here present because they are the ones that hold their future. The speaker also stated that the old politicians are the stumbling block for the youths and they must start thinking of ways to do away with them even though it is not going to be an easy task. He advised that the youths should learn on how to balance with the old politicians as they have many things to learn from them.

Another panelist in person of Fatima Muhammad when asked about the role of women in politics, looking at it that women constitute the majority when it comes to number of registered voters, she started by saying that she decided to join politics after seeing what a former governor did in terms of empowering women and that informed her that if women are actively involved, their lives would be better improved. She stated that a lot of factors hinder women participation in politics in Jigawa state even though they constitute the majority when it comes to voting power. Factors like stigmatization from the society, male chauvinism and the manipulation of religion hinder women from participating actively in politics. Fatima Muhammad added that it is only a woman that knows exactly the problems faced by women, she argued that issues related to girl child abuse, rape and women empowerment can only be properly debated and legislated upon if women are given the chance to participate actively in politics.

Dr. Muaz Abdallah when asked what are the ways or the things to be considered or looked upon from a candidate? He stated that there is a need to clearly understand the role of the leaders and the led. We should try as much as possible to understand the capacity of people that want to represent us at various capacities of governance. He added that the theme of the event is well structured because every society develops when there is strong leadership and those leaders most possess such qualities of honesty, trust, integrity, compassion and personal conviction. He equally encouraged the youths to actively engage in politics and should not let the old politicians scare them. He also asked why is democracy thriving in other countries but failing in Nigeria? Why did democracy worked in the first republic but it is now not working? When was the vacuum created between the past leadership and the present and how do we prepare and build the present aspiring youths?

There was a general discussion and some participants made comments while others asked questions. Some of the comments made are as follows;

In the same vein, questions were asked such as;

In response to the comments and questions raised, Hon. Muhammad Kafin Hausa stated that the youths should be supported by both the old and their fellow youths. That it is only when the youths organize themselves and stop looking at the material benefit they will get from the old politicians that they will be able to liberate themselves. On the issue of women participation in politics, he stated that in Jigawa state, women have been given the opportunity but they have failed to fully protect and represent their fellow women because they don’t support each other.

Hon. Khalifa Kabiru Andaza responded by saying that It is not just about saying the youths should lead, but it is about what the youths are made up of, there quality and capacity matters most. He suggested that there should be platforms of mentoring the youth’s right from secondary schools. On who should inspire the youths? He said that we know them, we see them and we relate with them in the society. On politics as a dirty game, he said it is only when you join politics and see what it entails then you can bring in the much needed change and change the narrative.

From her own part, Hajiya Fatima responded by saying that many things have been said and the youths need to rethink and understand that their future is in their hands. On whether the youths have sympathy or not, she said the youths should all look at themselves and measure how they relate with people in their immediate society. She concluded by saying that women have some limitations in politics and most women in Jigawa state are uneducated and as such find it difficult to engage in politics.

Dr. Abdallah Muaz responded by stating that participating in politics is for everybody, both the old and the young. He call on especially the educated and enlightened citizens to actively engage with people at the grass root level, we should all go back to our various constituencies and observe what are the real issues so that we can have a say. In addition, he stated that not all the youths will become leaders but they all have a role to play. We should form a committee in our communities that will serve as a screening center for whoever wants to contest for a public position and through that we can be able to assess whether he is capable or not. He also urge the youths to look for like minds in their respective communities and form a strong network capable of bringing the much needed change. On the question of who should inspire the youths, he said that we cannot do away with the old politicians because of the vast experience they have but we should try to actively engage them and learn the positives from them. On the issue of changing from the British system and adopting the American system, he said that our pluralistic nature made the American model a better option for us unlike the British system. He argued that the American model did not fail Americans but has failed in Nigeria. We should may be look at our values and see what the problems are. In the past we had leaders at their very youthful age and they performed well. He concluded by saying that all we need is consistent value re-orientation in the society.

After the general discussions, a presentation on consensus reached about attributes and characters of a good leader were highlighted as follows;

On the closing remarks, the Executive director of OCCEN thanked all participants and assured them a report of the event will be produced and that all the key and important issues raised will be documented as a consensus on the qualities and characteristics of a role model and will be published on newspapers and social media handles.