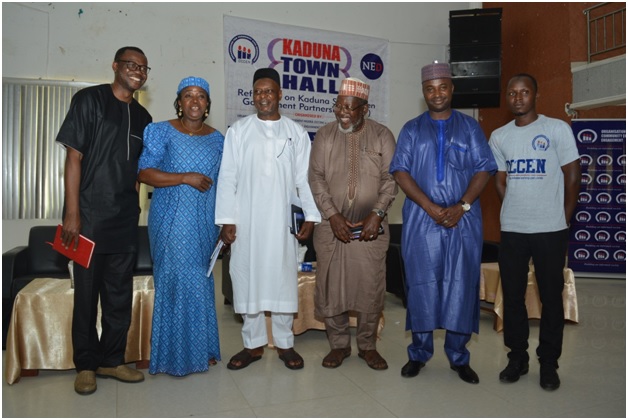 The Organization for Community Civic Engagement’s Kaduna town-hall meeting was attended by diverse civil society, youth and citizens groups and featured passionate discussions about the Open Government Partnership (OGP) process. Shortly after Nigeria joined the Open Government Partnership (OGP) process in 2016, Kaduna state also joined the process making it the first Nigerian state to join the partnership and the 15th subnational government in the whole world to do so.

Shortly after Nigeria joined the Open Government Partnership (OGP) process in 2016, Kaduna state also joined the process making it the first Nigerian state to join the partnership and the 15th subnational government in the whole world to do so. The OGP process is an international platform for domestic reformers committed to making their governments more open, accountable, and responsive to citizens.

Actually, Kaduna state’s journey to the Open Government Partnership began sometime in the middle of 2015, when a public opinion poll was conducted by the then new administration of Governor Nasiru el-Rufai with the support of UK-Department for International Development (UKAid-DFID) the outcome of which showed that a large segment of the state’s populace were unhappy with the way the business of governance was conducted by successive administrations in the state.

This was what informed the state’s decision to join the OGP process with the key objectives of to promoting fiscal responsibility, access to information and citizens’ engagement, amongst others. Thus, Kaduna came up with its State Action Plan (SAP) for the OGP process which has a number of commitment areas around citizens’ participation in budget process, Open Contracting Index and establishment of public ownership register. Other key commitment areas are to do with compliance with the Freedom of Information (FOI) Act as well as ease of doing business.

“Civil society organisations are now involved in budget process from the formulation i.e release of budget call circular to implementation. We also came up with the Kaduna Citizens App which allows citizens the opportunity to assess the quality of projects being executed by the government,” said Phebe Yayi, Director, Development Aid Coordination, Kaduna State Planning and Budget Commission, during the town-hall meeting on Kaduna State OGP process organized by the Organization for Community Civic Engagement (OCCEN) last week.

OCCEN is a nonprofit organisation working to promote democracy, good governance, and peace-building across the northern Nigerian states of Kaduna, Kano, Jigawa,  and Zamfara states and the town hall meeting was organized with the support of the National Endowment for Democracy (NED), the US nonprofit foundation dedicated to the growth and strengthening of democratic institutions around the world.

“By keying into the OGP process, the Kaduna State Government is exposing itself to the public’s scrutiny. OGP is about strengthening public institutions, promoting advocacy and reforms as well as opening up the governance space for civil society to influence government policies and programs,” said Abdulrazaq Alkali, Executive Director of the Organization for Community Civic Engagement (OCCEN) while delivering welcome remarks at the event.

“OGP is about co-creation which means equal partnership between government and civil society; as someone said, OGP is the most beautiful thing that has ever happened to the civil society. The idea for this town-hall meeting is for the government and citizens to rub minds about the journey of OGP in Kaduna state so far and also come up with a way forward,” he said.

Also speaking at the event, Shehu Dalhatu, a professor of political science at Bayero University, Kano, who was also the moderator for the Kaduna town-hall meeting said democracy was about the participation of all citizens in governance processes including policymaking and implementation of government policies.

“Transparency and accountability cannot be achieved without citizens’ participation in governance; greater involvement of citizens in state affairs. Therefore, the civil society must be more committed to engage with government and do so with a sense of fairness, impartiality and non-partisanship. They must commend the government where it has done well and scold it where it has erred; the weakness of civil society also contributes to poor governance,” said Dalhatu.

Mustapha Jumare is the civil society co-chair of the OGP process in Kaduna state who said the civil society in the state were making efforts aimed at ensuring effective budget implementation as well as monitoring the government to ensure its policies were of benefit to the citizens and that the policies were duly implemented. He also spoke about a community service charter introduced across all the local government areas (LGAs) of the state which he said had also given citizens the opportunity to make inputs to the state’s budget.

In closing remarks at the event, Abel Adejor, Kaduna State Team Leader, Engaged Citizens Pillar of the Partnership to Engage, Reform and Learn (ECP-PERL) programme urged the citizens of Kaduna to more actively engage with the process adding that the state’s performance would be reviewed after 2 years. PERL is a governance reform programme funded by the UK-Department for International Development (UKAid-DFID) and has been supporting the OGP process at both states and federal level in Nigeria, from inception.

The OCCEN town-hall meeting was attended by diverse civil society, youth and citizens groups and featured passionate discussions about the Open Government Partnership (OGP) process leaving the participants well informed about the OGP process and thus ready to key into the opportunities it provides in making governance more open, transparent and accountable.

The program started by 10:20am with opening prayer in individual faiths.
General overview was given on the program by Director OCCEN (Abdurrazaq Alkali) who also read the agenda and introduced members of the high table.
Professor Shehu Dalhatu was appointed as the moderator of the event.

The moderator began by underscoring the importance of civil society organizations’ (CSOs) role in governance; by following up what the government is doing so they can correct or appreciate the government as the situation may warrant.

An overview of OCCEN was later given by Mr. Abdurrazak Alkali, stressing its core functions mainly to ensure good governance; coating Dr. Atibe who said “OGP is the most beautiful thing that ever happen to CSOs”. Alkali shed more light on what OGP is all about, citizen engagement and empowerment. He continued “OCCEN is here so that the government can reflect its success and challenges in OGP”; in kaduna, OCCEN trained a number of youths on different areas of community and civic engagement. Also, OCCEN works in the cities of Zamfara, katsina, kano etc.

Prof. Dalhatu pointed out that OGP has three thematic areas;

Mrs. Phebe Sukai yayi, who was a Representative of the honorable commissioner, ministry for budget and planning, Kaduna state, stated that even though they have not started activities based on development plans, the government is still active on OGP. She added that from its inception, the government conducted a citizen perception survey which result showed the majority were unhappy with the method of governance in the state. Mrs. Yayi informed that with the coming of the present administration, Kaduna state Budget was increased by over 3bn to capture more of people’s desire and needs. The state also developed Kaduna citizen access online application where GPS of project sites can be taken for monitoring by CSOs and individuals. Also M and E department has been established and strengthened.

According to Mrs. Yayi, Kaduna action plan (AP) was formed with the state steering committee overseeing the progress and challenges of the plan.
The AP would promote citizen participation in budget process, reducing corruption among people, improve access to information by improving citizens’’ participation in governance.

The moderator of the event later re-emphasized genuine participation as key to achieve OGP.

Alh. Mustapha Jumare, representative of CSOs indicated that OGP is a global activity with 75 participating countries, 5 of which are in Africa. He added that Nigeria joined 2016 but much earlier, kaduna, as a state showed interest. According to Jumare, Kaduna is the only state that joined the OGP in Nigeria in July, 2017. He said over 150 CSOs jointly agreed to joined in kaduna but nominated 7 for representation in the steering committee; e.g. concern citizens, Nigeria union of journalist, kaduna maternal accountability committee etc.  Jumare recalled that the committee, in its office in the ministry of budget developed the AP. He later commended the effort of the government so far on OGP and indicated that the CSOs and government are now trying to develop the M and E part of the AP.

The moderator called for more information about the content of the AP requesting that the what, how, when and extend should be spelt out in the meeting. He also stressed that the issue of dialogue should be taken into cognizance in the OGP.

Maika Shafi from kaduna media cooperation requested that people with disability should also be carried along in the OGP.
The Government representative replied that the government has policy on social inclusion which will soon be implemented; stressing the government ensures that no citizen is excluded in this policy.

Yusuf Guje from CALBET appreciated OCCEN, NED, government and other stake holders for organizing this event. He asked that what mechanisms are put in place to show the needs of citizens are considered down the grass root to fill in the gap?

Jumare responded that CSOs represent everybody, including the less privileged. He added that from the government part, commissioner for justice is also there to ensure involvement of all, including the disabled. He finally stressed that creation of awareness is the key.

John Akoh from interfaith mediation center stressed that most of the problems in the society are resulting from people’s grievances towards government; so, OGP can bridge the gap. He inquired “how can the implementing partners ensure budget is sincerely and fully implemented”?

Mrs. Yayi reiterated that the government has established a forum (on the internet) where all government policies, projects and laws are published for better community engagement.

Awaduna Ingel from liberty radio asked that how would the government ensure continuity of OGP?
The moderator called for institutionalization of the OGP.

Also, Government representative emphasized more representation of CSOs as a way OGP continuity which jumare seconded.
The moderator also added that ministry of women affairs also ensures involvement of all.

Muhd Sani Kashim from one Nigeria initiative commended the government for bringing OGP; also advised that the program should be taken down to the grass root e.g. remotes villages, etc.

The program ended with a closing remark by Mr. Ebel Adejour who re-emphasized on fairness and equity in the composition of the steering committee. He challenged the participants on following up to the government policies and project especially the budget which was published online. Mr. Adejour also passed his vote of thanks especially to the Director OCCEN for organizing the program, Kduna state government, representatives of CSOs, Kaduna youth media forum and all other all other participants in the meeting.