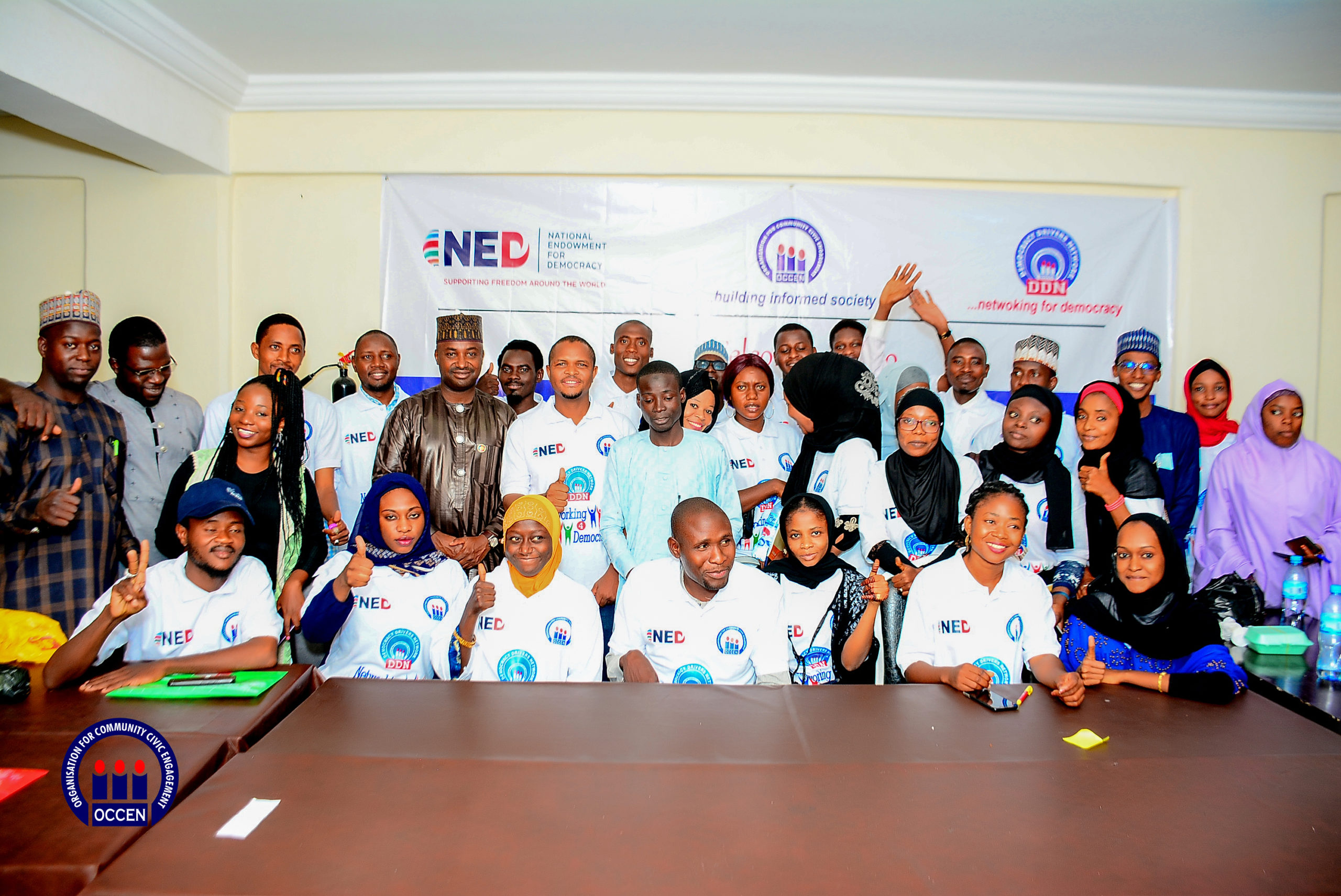 The Organization for Community Civic Engagement (OCCEN) with funding support from National Endowment for Democracy (NED) organized the three day training with the aim of building the capacity of young people from Kano, Kaduna, Katsina, Jigawa, and Zamfara states on democracy and civic engagement so that they may return to their respective states and communities and continue the cause. Participants were also trained to push for and ensure compliance with the rule of law and the principles of human rights across all strata of governance. A total number of 40 participants from Kano, Kaduna, Jigawa, Katsina and Zamfara came for the training.

The training started with an opening prayer from a volunteer, and then followed by self introductions by all the participants and the OCCEN team. The OCCEN ED Abdulrazaq Alkali took over to give a welcome remark and an overview of strengthening youth political participation in Northwest Nigeria. The objective of the programme is to strengthen the capacity of the youth to demand for good governance and accountability.

Aqibu Hamisu, lead for Kano DDN chapter gave a brief introduction or background of the Democracy Drivers Network. It was introduced to expand the democracy principles through inclusion of the youth in the democratic process. Its objectives includes promoting political transparency & accountability and strengthening networking among the democratic drivers. Josephine Omajari gave them a pretest to evaluate and ascertain their level of understanding of the concept of democracy, political pluralism, human right and rule of law; they wrote down their expectations from the training and submitted with the pretest.One of the resource persons Ibrahim Waiya The president of Kano civil society forum was introduced by the ED. He presented the concept of civil society and their role in society. Then Kabiru Dakata the second resource person presented on The Concept of Advocacy and CSO Media Engagement. He defines advocacy as

Criteria for Selecting an Advocacy Issue

The problem is easily understood.

• How feasible is it to address the issue? (Politically, financially, socially)

• How important is it to solve this issue?

• How urgent is it to solve this issue?

• The issue is consistent with the group’s values.

• Working on the issue helps build alliances with other groups.

• Reliable data are available to support advocacy efforts to address this issue.

• There is at least one policy solution to address the barrier.

How CSOs can properly engage media

One of the participants gave a recap of the previous day topic, followed by presentation by the prof. The topic for the day were

Democracy is the most popular system of government in the world today.Whether in its liberal or socialist form, democracy is directed at peoples’participation in the art of governance.

HOW TO MEASURE THE PROGRESS OF DEMOCRACY IN DEVELOPING SOCIETIES?

The day started with a recap of the previous day topic by one of the participants. Then the first resource person Professor Zun nurain took the first topic titled Concept of Human Right and Rule of law.

What is Rule of Law?

Principles of Rule of Law

2. Equality before Law: The second principle emphasizes everyone, including the government, irrespective of rank, shall be subject to the same law and courts.

3. Predominance of Legal Spirit: the rule of law is that the general principles of the constitution are the result of judicial decisions determining file rights of private persons in particular cases brought before the Court.

Then Abdurrahman Abdu State Steering Committee member, Kano OGP took us on the concept of Good Governance and Open Government Partnership. Then the OCCEN ED took us on the concept of civic engagement and networking. He urged the participants to be good ambassadors of democracy in their respective communities and used what they have learnt in promoting democracy, good governance and the rule of law. Then Josephine gave them the post test to see if the training has improved their knowledge on the topics. Aqibu gave the closing remarks and wished everybody safe trips back to their respective states.

Table 1a : Rate of understanding of Civic Engagement before  workshop.

Table 1b. Rate of understanding of Civic Engagement after the workshop

Figure 1a. Rate of understanding of democracy before the workshop

Figure 1b. Rate of understanding Democracy after the workshop

Table 2a. Knowledge about political pluralism before the workshop

Table 2b. Knowledge about political pluralism after the workshop

Figure 2a. Rate of understanding the Electoral process before Workshop

Figure 2b. Rate of understanding Electoral process after the Workshop

Table 3a.  Knowledge about Open Government Partnership (OGP) before workshop

Table 3b. Knowledge about Open Government Partnership (OGP) after workshop

Figure 3a. Understanding of Universal Human Right before workshop

Table 4a. Understanding Rule of Law before workshop

Table 4b. Understanding Rule of Law after workshop